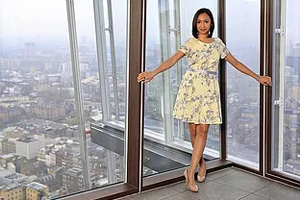 “You can always tell when there is an engineer on the viewing gallery of The Shard,” says Roma Agrawal, “Because instead of admiring the view of London, they’re looking up at the amazing steel structure of the spire.”

Roma is talking about Western Europe’s tallest building, one of the most recognisable towers in the world, and the building she spent six years working on as a structural engineer. She designed the spire and the foundations of The Shard, and her pride in her work shines through her talk.

Roma Agrawal is visiting The University of Sheffield to give a guest lecture to members of SELA, Women in Engineering and other students. She takes her audience through her background, from playing with Lego and Meccano as a child, to studying Physics at Oxford University, to her decision to become an engineer. Roma describes how she realised that she wanted a job that used her creativity and problem-solving skills alongside her technical background, so she did a Masters in Structural Engineering and graduated into a job at WSP, a leading structural engineering firm.

Roma has a huge number of engineering projects in her extensive portfolio including bridges and sculptures, but the shard is the project she talks most passionately about, perhaps because it offered the most challenges, which required clever engineering solutions to overcome.
For example, due to the tight time constraints required for the completion of The Shard, (the exterior of the building needed to finished in time for the world to arrive in London for the Olympics,) the foundations could not be completed before the superstructure was started. As a result, the building had to go up at the same time as the ground beneath was being excavated. The foundation slab was cast only after the first 23 storeys had been built above it!

As an undergraduate civil engineer in the audience, I am amazed by what modern engineering can accomplish. Roma goes on to describe her work on the spire of The Shard, which offered many challenges of its own, like ‘how do you construct something 300 m above the ground with up to 100 mph winds?’

But it is not just her engineering achievements which make this woman remarkable. Roma talks to us about her work engaging with the younger generation, encouraging them to go into engineering. It’s hard to see how any school student wouldn’t be inspired by her stories, and sheer enthusiasm for her job. She’s done talks across the UK and abroad, to students, institutions and other engineers, about her work, addressing the UK engineering skills gap, and the importance of diversifying the workforce.

The SELA members in the audience are ourselves a group of people who have been brought together to try to address one big skills gap in particular, in leadership, and since many of us listening are also working to encourage young people into engineering, I see a lot of heads nodding.

Roma talks about the importance of good communication, positive interaction with others and building your confidence. She says if you’re comfortable, it’s time to do the ‘next big scary thing’. When asked what the biggest next big scary thing she’s done so far was, she points to her leap into media, becoming one of M&S’s leading ladies, truly destroying the stereotypes that exist around her profession.

The following week I’m in London with my sister and as we’re passing through Clapham junction on the train, I get a great view of the very building Roma had been describing.

I tell my sister, “Did you know, they built the first 23 storeys of The Shard before they cast the foundation slab?”

She didn’t know, but she looks impressed, and I see other faces on the train glance at me with interest.

I feel proud. “That’s right!” I want to say to these strangers, “It’s engineering! And it’s amazing!”

www.romatheengineer.com
Posted by SELA at 10:00