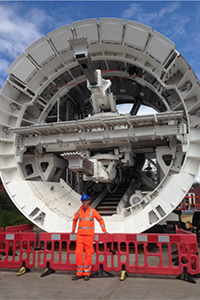 James Featherstone is studying Civil & Stuctural Engineering and is doing his summer placement at Network Rail, working on the Farnworth Tunnel project.

I am based full-time on site at Farnworth Tunnel, a tunnel widening project as part of the wider Northern Hub electrification works which Network Rail have undertaken. The project is truly one of a kind and brings with it challenges which are new to experienced engineers and myself alike.

The site originally had two listed Victorian tunnels, built in the 1830s and 1880s. In order to be electrified, one tunnel needed to be enlarged. The two tunnels had tracks running in each direction (known as ‘up’ and ‘down’ in the railway industry). Running over the top of the tunnels is a busy motorway (the A666) and the railway service was required to be kept running while works were done.