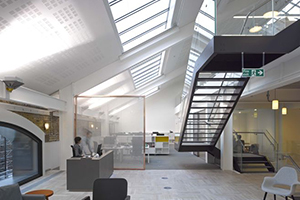 Over the summer I have had opportunity to work as an intern for 8 weeks at Argent in London, a construction company specialising in mixed-use development. They are best known for their efforts in regenerating King’s Cross station and the surrounding area into a vibrant new quarter for the public, transforming the once negative reputation of the site.

The main project that I was working on was our application to become the main tenderer in the development of Euston Station, following approval of the new HS2 line from Euston to Birmingham. Initially I did a lot of background reading to understand the context of the development and the stakeholders involved, resulting in two presentations about other high speed rail networks in Europe and also a breakdown of the needs of the affected stakeholders. Working in small group led by Chris Smith (Senior Projects Director) and Kate van Den Driessche (Assistant Project Manager), I was tasked with assimilating the documents issued by HS2 Ltd and understanding their vision for the station. This brought in my analytical ability developed throughout my degree to extract key messages from multiple, occasionally conflicting, sources of information. This resulted in a long-term Gantt chart that was included in the final submission. I enjoyed the organisational and management aspect of my role, like creating trackers for the authorship of the submission and its subsequent reviews. During periods where I was also involved in the infrastructure team for a project in Brent Cross South, as-well as the GIS (Geographic Information Systems) team, I utilised some of the time-management skills developed through SELA in managing my priorities.

I learnt how to use GIS software when creating composite images of different site information for the various projects Argent were working on. This was something completely new to me and I enjoyed the methodical approach to it. Perhaps my highlight of the placement was attending a community engagement event for our development in Brent Cross South. There I got to see how local resident’s felt about the construction and what they wanted from it. Argent are well-known for their place-making ability for the public. There I saw plans for the temporary green spaces they would create during construction so that residents still have a communal site to enjoy.

I felt very fortunate that I could immerse myself in new industry and learn so much from my supportive colleagues. One of the most useful aspects of my placement was just talking with and learning how some of the staff had gotten into the industry and the various routes I could take as-well. This resulted in my selection of a final year module MEC 437 related to Building Simulation, a potential path into the industry I had not considered before. Overall this wonderful learning experience has made me think about alternative paths I can take after graduation, whether that be in a technical or in a more project management role. I’d like to thank Chris and Kate for their invaluable mentoring, and would definitely encourage others to apply to their internship scheme.
Posted by SELA at 11:36