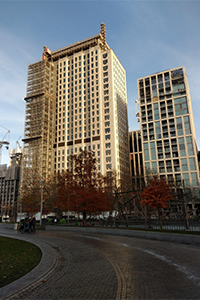 After a couple of hours journey through the rolling snowy hills of England, passing many landscapes I used to call home, I arrived in a bleak, mid-winter London where the frosty winds did blow! Due to being behind schedule I hurried to the tube to Waterloo. The tube was pleasantly warm which made the short journey more bearable.

At Waterloo I exited the station via the South Bank Entrance to be confronted by towers under construction and a typical busy London road; turned out this was the Shell Centre! Getting to the main entrance was a struggle as I had to go through an unsigned maze of tunnels but finally I arrived. As I entered I was greeted by a stunning marble reception where I signed in and waited for my guide, Mars, to collect me. Whilst I waited I read the displays about the Shell Eco Marathon for school students which I once was a part of.

My tour started at the security gates which opened fancily after I had swiped my visitor’s badge. From there we took a lift to Floor 14 which was a ‘standard office’ according to Mars. The office itself was rather nice; all open plan with the odd meeting room within the centre of the floor plan close to the lifts. It was all very clean, green and had a lovely view of the London Eye. I had the privilege of talking to a few colleagues on this floor who had been working there for over ten years. They had been a part of different sectors of the company as this is what Shell offer, which I thought was a clever way of keeping your staff happy. The main thing they mentioned was about how nice the new offices upstairs were!

Mars then boasted about the gym located half way up the central tower that we were in, and low and behold, it was rather swanky. All the equipment you’d expect in a top quality gym along with trainers and a pilates room. Again the view was beautiful; this time we were at the level of the buildings on the north bank of the river.

The highlight of the tour was Floor 24; a recently developed office which had state of the art hydraulic desks which could be a sitting, a standing or ‘somewhere in between’ desk along an open plan which had views above the buildings so you could observe London all the way to the horizon. After another few chats with Mars’ colleagues, where he fully recommended being a part of Shell, we made our way down to the bottom floor to have lunch.

I was treated to a rather nice Mackerel mac’n’cheese with roasted leeks and button mushrooms; a very pleasant change to my usual student diet. In the cafeteria, which reminded me of school, Mars and I enjoyed our delicious lunches and talked over my CV. This was very insightful as Mars’s job is to look over 15,000 applicants every year for any job Shell offer.

I now feel as if I have a strong CV. I got tips which included the usual, spelling and grammar checks, no inaccurate or exaggerated details and keeping it all to two pages. The more detailed information where about what Shell look for in applications: 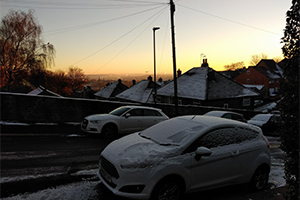 For Capacity, provide evidence regarding analysing and strategic thinking, developing solutions or creativity and innovation. For Achievement they look for results deliver, how you learn and adapt, work experiences/internships, awards (any you think are fitting), strong and constant academic performance. For Relationships they look for you to take leadership roles, how you exhibit teamwork and value differences. Building different types of relationships are key, especially when working within a global company. When talking about your education they don’t discriminate including statistics about activities to help the person reviewing your CV to get a better idea about you. Any working experience; paid, voluntary or shadowing are fully recommended being included. Most examples are valid for any section but you need to explain more what you did within the activity or how that thing has developed you as a person. If the explanations result in you having to take out one or two achievements then so be it, make sure these are your less important to the job that you think. However, when attending an interview also mention these achievements as this shows you have even more to give!

After all this I departed to spend the rest of my day in London where I went sightseeing. I returned home after a lovely day out which has really helped to give me ideas about career paths and the general work place. And to top it all off, I was confronted by a stunning sunset that capped off a brilliant day.
Posted by SELA at 10:00