“Business is fun, but not funny” 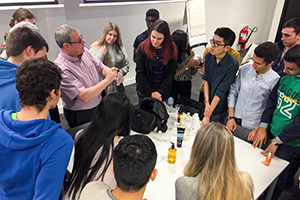 It’s not everyday that you get to meet the CEO of a multi-million pounds business and yet recently, all SELA cohorts got this exact chance.

Graham Royle, CEO of the GRI Group, founded the highly successful firm in 2001 and is currently providing for Unilever. His formula is behind brands like Fairy and I Love.

Throughout his talk, a few things became obvious. We got to play with some of the Personal Care products he brought along (I “borrowed” a bit of raspberry-scented hand cream), as he explained the development, branding and pricing of each. He showed us the drawing of the internal mechanism of a liquid soap pump, a masterpiece of engineering.

As a Computer Scientist, I rarely have any physical materials to play with (outside keyboards), while colleagues from Materials Science get to work with glass and metals and Aerospace build their own small planes. For me, learning more about products I use daily is almost like finding out the trick behind a magic number: it only makes the whole thing cooler. For example, the reason clothes feel softer after washing is due to strings of lipids being formed over the fabric by the detergent. Same goes for hand creams. White shirts don’t get whiter, they get covered in a substance that acts like an optical illusion, making them seem brighter. It’s brilliant, it makes me feel sad I didn’t like high school chemistry more.

Mr Royle ended by giving us some advice on how to tackle the leap into industry. Most importantly, he told us to be outspoken and brave in taking responsibility. Not in a loud annoying way, but rather in such a way as to earn the attention and respect of the higher ups.

All the cohorts are headed towards summer internships, year placements or full-time jobs. Getting to meet and talk to one of the most powerful CEOs of British industries was the additional boost of insider knowledge we all needed at this critical stage in our careers.
Posted by SELA at 10:12