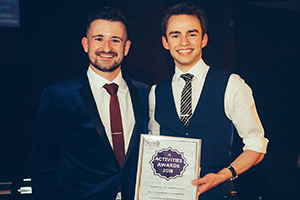 SELA member Adrien Gallet has been awarded the Outstanding Achievement (Societies) prize for his role in the Investment Society at this year’s Activities Awards. The annual Activities Awards aim to recognise and celebrate the hard work that University of Sheffield students put into Societies and Committees each year.

Adrien joined the Investment Society in his first year at university due to his interest in financial markets. He soon realised that the society lacked an activity that encouraged complete beginners to join, and recognised that the society focused solely on investing, whilst a large part of finance revolves around trading. Adrien, with the help of the society’s President, created and launched the Trading Division in his second year at university, and became the Chairman of the division.

Adrien was responsible for covering the current state of financial markets, and taught short 30-40 min lessons. Adrien said ‘The first year was quite the struggle, because launching something from scratch means you are responsible for everything: advertising, generating content, booking rooms, ensuring resources are available, accommodating everyone, and so on. So after my first year, I realised I had to make some changes, and that involved figuring out a way to get people more involved.’

To get more people involved Adrien started a virtual trading competition, where students competed in groups against each other, trying to generate the highest return over the semester. This scheme, in addition to improving the delivery of content to a large group, turned out to be a resounding success. It pushed the Trading Division from a small section of the Investment Society to their core group of participants. This success has continued throughout the year and during the Spring Semester Adrien introduced his own website, pxstrat.co.uk. This entrepreneurial business venture is something that Adrien hopes to continue to develop and grow over the coming year, as he embarks on his year in industry.

On receiving the award, Adrien said ‘Amongst my friends, I am known for my calm and thoughtful personality, especially during stressful situations. Yet during that moment when the winner was about to be announced, I couldn’t help but feel nervous. When my name was announced, I felt a sense of achievement, I was proud that after every challenge and hurdle along the way, I pushed on and succeeded.’ Adrien also reflected on how SELA has helped him achieve his goals, stating ‘SELA taught me the importance and the skills to pursue projects I am passionate about; the Engineering360 project, which my cohort conducted during our first year, was a test of our time and people management skills, both of which came in highly useful during my time as chairman of the Trading Division.’
Posted by SELA at 13:57