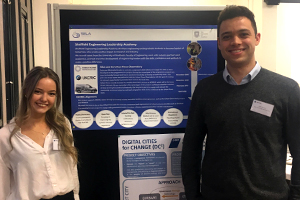 Recently, I made the journey down to Birmingham, with fellow Cohort 2017 member Kyle McLean, to attend UKCRIC’s annual Future Research Leaders conference.

In the second year of the SELA programme, stretch assignments involve both the leadership and project-management skills developed on the programme, and the technical knowledge developed through our degrees. Our stretch assignment this year is in partnership with the Urban Flows Observatory, a branch of UKCRIC. 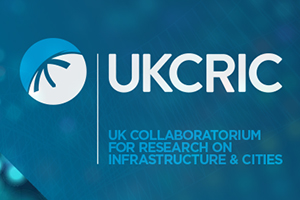 The UK Collaboratorium for Research in Infrastructure and Cities (UKCRIC) is a portfolio of research and innovation facilities and programmes, whose mission is to underpin the renewal, sustainment and improvement of infrastructure in UK cities and across the world.

One of these research programmes is the Urban Flows Observatory, a locally based project which will act as a data gathering platform for Sheffield. It is a £2.4 million project whose current mission is to measure air quality, energy use, weather patterns, structural materials and local food production. A recent addition to the Observatory is the mobile observation unit known as MOBIUS. MOBIUS has two primary functions: to gather data alongside the observatory’s fixed distributed sensor network and to perform as an outreach and educational tool, raising the profile of our work and the issues we seek to address.

SELA’s involvement in the Urban Flows and MOBIUS is in the shape of a project to engage the local population in the environmental observations that the facilities provide. Our aim is to engage with policy-makers, educators and the general public in order to encourage conversation around the issues that the Urban Flows highlights.

At our current stage of project maturity, we have a number of outreach ideas that we are developing, so the UKCRIC conference offered the perfect opportunity to engage with people from all over the organisation and get their input on our ideas. 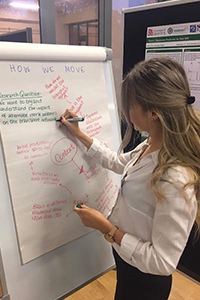 The day began with lectures from a number of guest speakers, addressing topics ranging from urban planning to research areas of the future. A particularly engaging session covered ‘City Resilience’, a concept that, as an aerospace engineer, I had never come across before. The speaker covered the different aspects of a resilient framework, including knowledge, place, people and organisation. In order to have a city that copes with change and the stresses of modern life, each of these areas of the framework should be developed. This issue of resilience was especially relevant to our project, as the Urban Flows Observatory aims to measure the ‘metabolism’ of the city, and the data that it captures could be used in some way against this framework, in order to establish the level of resilience.

Another fascinating aspect of the day included extensive discussion as to the major challenges that the urban environment and infrastructure will face in the future. In groups, we considered a massive range of issues, from transport systems to smart housing, and discussed ways in which UKCRIC’s facilities could help to tackle these challenges. This offered another fascinating insight into the potential future uses of Urban Flows, and gave us a vision of the next steps for the programme. We hope to take these ideas forwards and incorporate them into our outreach project.

Having been given the opportunity to present a poster outlining our project, we got a huge amount of positive and constructive feedback from conference attendees, and took home a much greater appreciation of the wider organisation and the research that they are involved in.
Posted by SELA at 14:08