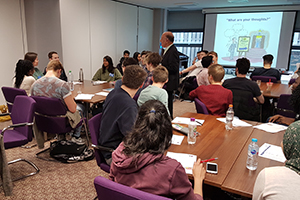 Recently, SELA Cohort 2018 sat down to what we had been told was a workshop on networking. I think most of us at SELA knew in the back of our minds that networking was important, but I can speak for myself when I say I had no clue how to take the topic seriously. To me, networking was something that dressed up people do whilst putting on fake smiles and feigning interest in others; hence I was a little sceptical at the whole thing. However, I can say that thanks to our brilliant workshop facilitator, Will Kintish, I left the room surprised with how much better I felt about the prospect of networking in the future.

Here are three things I learned in the session that I thought I could share...


I know it sounds obvious, but once you realise that networking is painfully simple, it takes a lot of the stress away. Leave the sales pitch at the door, don’t worry too much about not seeming interesting or impressive enough, just go in with the mindset that you are meeting new people. It’s not really any different from other types of social gatherings: the relationships you form may lead to some great opportunities, but initially, simply get to know them as people. Everyone is there to meet new people, and you are just as good as anyone else there, so go in with the mindset that you’re going to have a good time. Introduce yourself, use a couple of icebreaker questions, and let the conversation flow from there. 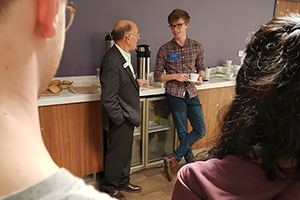 When you walk into a room full of people at an event, people will be arranged into predictable groups, these include open groups and closed groups, ranging in size from individuals to four or more. The key is to not try and enter a group of people that are closed off but to seek out those that are open. Preferably seek out a lone individual as they will be open for conversation; by doing this you can form an open group which others can join, or you can suggest the two of you introducing yourselves to another open group in the room. This will help you make the most efficient use of your time whilst at the event. Additionally, if you do find yourself speaking to someone rude or uninterested, simply excuse yourself and leave them to it: you will inevitably meet people like this so don’t dwell on it.


Make an effort to remember people’s names when they tell them to you. People will get the impression that you are interested, and therefore will take far more of an interest in you. Business cards can be an extremely useful tool, though don’t hand yours over without conversing a while first and if you are offered a card it’s a good idea to ask for permission to call them later for a follow up.

On a final note, the next time you go to a networking event, have the mentality that you’re looking forward to it. Everyone in the room will be there for the same reason, to create opportunities. You have everything to gain and nothing to lose.
Posted by SELA at 10:00