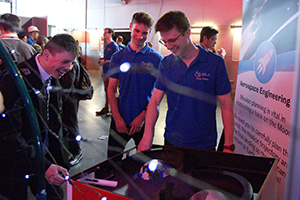 For a second year running, SELA was invited to Get Up To Speed (GUTS) – an annual event promoting STEM opportunities to young people aged 8 to 25.

Celebrating almost 50 years since the Moon landing on 20 July 1969, Cohort 2018’s project Apollo 50 simulated a lunar base and showcased some of the potential engineering challenges that would be encountered by inhabitants of the Moon.

The exhibit focussed on interactive tasks representing each of the nine main disciplines of engineering taught and researched in the Faculty of Engineering at the University of Sheffield. Young people were invited to help stop a nuclear leak as chemical engineers; send signals back to Earth as electrical engineers; and even navigate robots over lunar terrain as computer scientists! At each stand, a stamp could be collected on completion of the activity and added to the participant’s lunar passport, in order for them to gain full lunar citizenship. 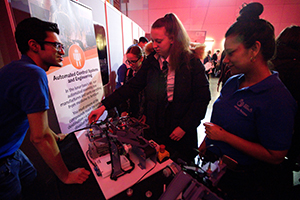 The cohort had two significant priorities in preparing these stands. First, in order to fully recognise the amazing opportunities available at the University of Sheffield, it was decided that every engineering discipline on offer had to be represented. Second, to maximise the project’s effectiveness by engaging students to an extent unparalleled by other exhibits, good engagement was a priority. This resulted in a total of nine interactive, informative and fun stands.

The efforts of the Cohort created an environment that embraced curiosity and encouraged questions, regardless of their complexity. In one case, it was very amusing to observe a particular SELA member tirelessly persevere in explaining the concept of voltage to a keen primary-school student, without stumbling through the myriad of complexity that is degree-level physics.

A fantastic knock on effect of the high level of interactivity of the exhibit, was that the stands even captured the interest of school teachers, which was reflected in the positive feedback the SELA exhibit received throughout the day. Teachers observed that the exhibit complimented the national curriculum and it had given them a plethora of ideas for ways in which they could incorporate student interactivity into their STEM-based classes. 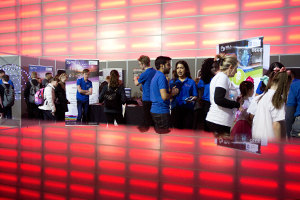 The success of the exhibit was so great, that the University of Sheffield’s Pop-Up University is now keen for a collaboration with SELA to bring a modified version of the GUTS exhibit out to the general public in September. The Pop-Up University offers a programme of exciting talks and showcases innovative research. The SELA cohort is very excited to be making preparations for this. Look out for more details, and see us in the Pop-Up University this September!
Posted by SELA at 14:48