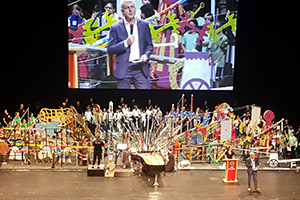 If I was to get you to write a list of what you would expect to see at a major conference, you would probably write down things like, smartly-dressed executives, immaculate business cards flying all over the room and leather-bound briefcases and handbags. You may even note down a plethora of delicately arranged “nibbles” and drinks, acting as a safety net for any executive keen to break free from conversation. What I wouldn’t expect you to list is a life-sized wooden giraffe, a brightly-coloured rainbow-shooting unicorn, an extendable, enlarged and multicoloured wooden hand, or a giant rabbit on a catapult - all playing the piano. Objects at the mercy of 88 primary-school children arranged in a semi-circle, under the watchful eye of Julian Lloyd Webber. Yet, fantastically, this is exactly what I saw, thanks to the work and commitment of The University of Sheffield’s Dr Candice Majewski, SELA cohort members James Rayson, Robin Watkins-New, James Whitehead and many other fantastic engineers and musicians from universities all over the country.

If you have read my previous article, you will note that the original idea of the 88 Pianists project was to create an unbreakable world record for the largest number of people playing the piano at the same time, a fitting way to mark the 500th anniversary of Leonardo da Vinci’s death. The criterion was simple: each child had to manually operate a piano key from 7 metres away. How this was done did not matter as long as any idea was physically possible to build. The project’s purpose was to celebrate da Vinci’s work, highlighting how it has inspired engineers and designers throughout the centuries. It was designed to encourage the next generation of engineers to hold on to the creative spark that lives inside them, to show that imagination and engineering do go hand in hand. It is worth browsing through the works of da Vinci (such as his infamous Flying Machine or his Catapult) to observe that the concept of imaginative engineering was something he held very dear. 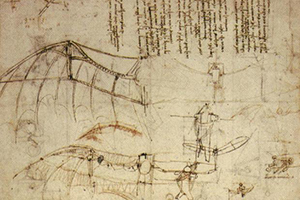 Upon walking in to take my seat at the Birmingham International Convention Centre, I was greeted by a dark stage, almost empty except for one lonely grand piano and a black climbing device. I, like many of the parents and officials viewing that day, was left confused. Where was the giant pizza slice? Had the massive wooden dog freed itself from its leash? Where was all the colour? But suddenly, tens of primary-school children bounced onto the stage and began to surround the piano. Some were sitting in front of it, some were lying down below and some were dangling from above. A pause. Then, the piano came to life and the hall was electric with a vibrant and pleasant tune being played by 31 brightly-dressed school children. All deep in concentration to ensure the tune was played with near-perfect coordination. The end of this performance was met with rapturous applause and cheering from both parents and officials. However, The University of Cambridge’s Dr Julian Attwood quickly walked onto the stage and announced that whilst the official world record had just been broken, the show had only just begun. And with that, the stage curtain flung open to reveal a semi-circle of 88 children all standing about 7 metres from a piano, each armed with one end of a very long mechanical finger. There were a variety of inventive mechanisms including large levers, hydraulic pumps, complex pulleys and even a couple of catapults. Every finger was decorated in a marvellously obscure fashion, serving to the wild imaginations of the school children (the chief designers) from across the country. 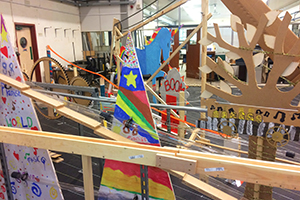 The entire audience gasped as the curtain drew and the conductor, Martin Riley, hurried onto the stage with a facial expression of awe, apprehension and shear disbelief. Then again, trying to produce a tune from a device that is independently operated by 88 people all awaiting your instruction sounds like an incomparably impossible task. Yet, with a confident tap of the baton and a brief count in, the concert hall once again came to life with a thunderous tune. This time, it was accompanied by the spectacular visual of all the functioning mechanisms. It is almost as if the amalgamation of fingers and pulleys blended into one living organism, dancing to the sound of its own tune.

Being part of this project has inspired me. I’ve realised that I can be any type of engineer I want to be after I graduate, as long as I don’t lose sight of my creative ability and open-mindedness. And much to my surprise, this epiphany did not come from this generation’s current academics. Rather, it came from the bright-eyed and fearless enthusiasm of tomorrow’s engineers. I would advise anyone, SELA member or not, to relish any opportunity to work alongside school children. They might just surprise you.