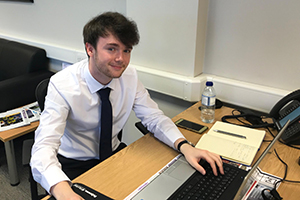 During summer 2019, I completed a 7-week placement at a company called Professional Energy Purchasing, working as a social media analyst. So first of all, you may be thinking that a social media analyst isn’t exactly something an engineering student might do, but hear me out. This opportunity came about mostly by chance, but that’s not to say it was a complete fluke.

Like the rest of the 2018 SELA cohort I was involved in Get Up To Speed with STEM (a big Science and Engineering event, to inspire 3,000 young people about their potential to succeed through engineering), and during the day we were all given the chance to look around the rest of the exhibits and do some networking.

Inspired by the story told by SELA Cohort 2017 member Dan Habbershaw, and with the added knowledge and skills I had learnt from the SELA workshop on networking with Will Kintish, I went and spoke to several companies. I asked them about who they were and whether they had any summer placements or internships available, as I still hadn’t secured one by this point.

Many of the companies said something along the lines of either “sorry, all places have been filled” or “It’s not me who deals with that sorry, but I can give you my business card.” While gathering business cards is useful, I was still empty-handed as far as a placement was concerned. 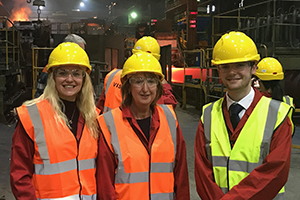 Spurred on with a desire to secure a placement for the summer, I eventually came across a small Chapeltown-based company called Professional Energy Purchasing. The managing director, Linda Spencer, was talking to some younger children about apprenticeships at her company they could do after their GCSEs. I caught the tail-end of this conversation and asked her whether she would be willing to take on an undergraduate. Low and behold, she was!

As it turns out, Linda had recently had a conversation with a University of Sheffield representative. They had spoken about the possibility of having an undergraduate join their company and do some work on their social media presence, as Linda was keen to keep her business up with the times. I wasn’t a complete stranger to social media, having been social secretary for the Mechanical Engineering Society and doing some similar work last summer, but this placement seemed like an ideal opportunity for me, as the energy industry is a sector I want to go into after I graduate. So this was a foot in the door, as they say.

During my time at Professional Energy Purchasing, Linda gave me many opportunities for networking, supported my learning about the energy industry, and also took me on many visits to factories and other sites. The placement was an amazing insight into the sector. I learnt a lot about how social media works too, being sent on a training course and meeting other social media marketers. I’m really glad I completed this placement. The opportunity may not have been exactly what an engineering student might be after, but it certainly has given me a leg up onto the first rung of the ladder, and as bonus, I’ve made some new contacts, some of whom were offering me placements for next summer! Funny how things turn out.
Posted by SELA at 15:25