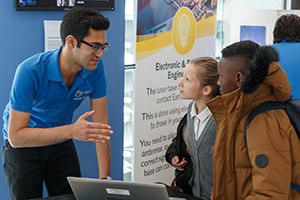 From September 20-22, SELA Cohort 2018 ran the first-ever undergraduate-led installation in the Pop Up University – the University of Sheffield’s city-wide engagement event. Throughout the weekend, the Cohort showcased engineering, in all its disciplines, helping visitors of all ages to see how engineers create and shape the world around us. The event utilised many of the stands that our cohort used for the ‘Get Up To Speed With STEM’ event at the Magna Science Adventure Centre in Rotherham, back in late March. The exhibition included a pinball machine, a marble run activity, a cog puzzle and an electrical engineering-related joystick game – all built by students from the cohort – as well as robots and lab demonstrations.

I’m personally really satisfied with how the event turned out and it doubtless marks a positive start for our Cohort as we embark on our upcoming second-year projects for the 2019-20 academic year. After the success of our Lunar Base escape-room style challenge at GUTS 2019, it was great to be able to maximise the impact our interactive exhibits could make, by bringing them to Pop-Up University. 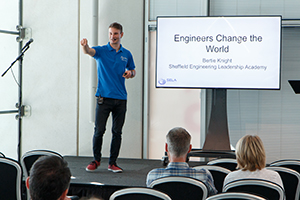 Aside from the success of the exhibition itself and the payoff from the Cohort’s hard work, I was also delighted to deliver a 15-minute talk at the event. In spite of all the dread in the lead up to it (even if yes... I did volunteer to do it) I weirdly enough found myself actually enjoying it! I sense I got the audience quite enthused as well since I had several visitors talking to me about it afterwards. Because public speaking is a skill that I aim to improve through my participation in SELA, I’m now happy to say I found the experience very positive and that hopefully this will have been an acceleratory step for that goal of mine.

I handled the first section by asking the question ‘do we take engineering for granted?’. The SELA exhibition was partially based on moon colonisation, so I referred to it and added how challenges for colonising the moon (e.g providing air to breathe, water, food, warmth, etc.) are all basics for us here on Earth, particularly in the global north, all thanks to engineering. I went on to detail things that the audience had likely done that day such as turning on a lightbulb; accessing their phone/laptop; using any mode of transport; having breakfast or walking inside a building, and I outlined where engineering had been involved for each one. Through this exploration, I demonstrated how engineers shape our current world – and we’re so used to it, we take it for granted. 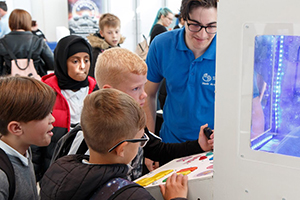 The second half, however, was the main reason why I wanted to deliver the talk in the first place. When drafting the talk there was some deliberation over a multitude of topics that I could cover in the second half, but in the end, I decided to focus on my main passion in engineering, which is fighting climate change. So in this section, I detailed some of the effects of climate change: refugee crises, sea-level rise and natural disasters. I also decided to include in the talk a leader who I greatly admire: the American politician Bernie Sanders, who often says we need to treat climate change like it’s a WW2-level threat. On this, I think Sanders is wrong and that climate change really is like a WW3-level threat – because the effects of climate change could be irreversible and would be a disaster not just for my generation but for all those that follow it.

I went into depth on some of the different ways that engineers are tackling the climate crisis. These were: 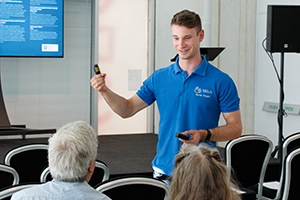 My favourite part of the talk was right at the end. Just as I wrapped up and asked for questions, an audience member pointed out that Friday’s amazing climate strike protestors had just started marching past our window! As a green activist myself, it felt bizarrely synchronistic and of course, I went along and joined in with the protests after the event.
Connect with Bertie on LinkedIn or via Twitter
Posted by SELA at 12:40